Previous Next
Loving Violet: A Novel by Steven Lewis 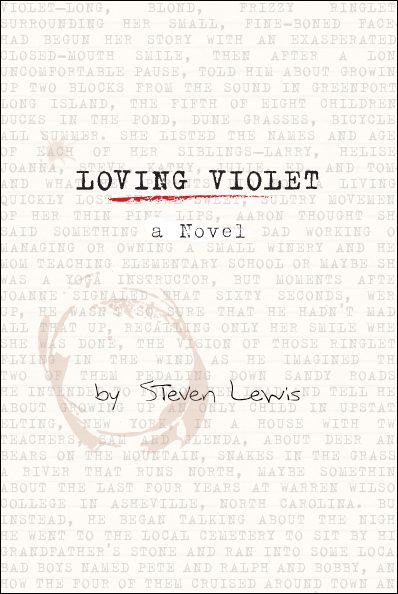 September, 2017—New Paltz, N.Y. LOVING VIOLET is a cinematic narrative about conflicting dimensions of love, romantic as well as familial, told against a backdrop of the pleasures and frustrations of “the writing life.” A generational sequel to TAKE THIS (Codhill Press, 2015), the book follows the late Robert Tevis’s grandson Aaron through his entry into a graduate MFA writing program and the arms of the most drop jaw gorgeous—and disarmingly untethered—girl he has ever known.

Steven Lewis is a former Mentor at SUNY-Empire State College, and current member of the Sarah Lawrence College Writing Institute faculty. His work has been published widely, from the New York Times notable to the Road Apple Review obscure, and includes a biblically long list of parenting publications (7 kids, 16 grandkids). He is a Contributing Writer at Talking Writing, Literary Ombudsman for 650: Where Writers Read, and El Jefe of the Duckdog Writing Retreats on Hatteras Island, N.C. Among his many books are ZEN AND THE ART OF FATHERHOOD, FEAR AND LOATHING OF BOCA RATON, TAKE THIS (Codhill Press), IF I DIE BEFORE I WAKE (Finishing Line Press), a chapbook of poems.

“Steve Lewis has written one of the most bewitching characters to come along in contemporary literature. Not since Scarlett O’Hara has there been such a lovable vixen. He writes such pleasurable prose, it may take some reflection to realize how much wit and wisdom he shares with his readers. In the end, I was as smitten as his hapless grad student hero. Seasoned with insider’s spice on the book business.”
—Laura Shaine Cunningham, Sleeping Arrangements, A Place in the Country

“In Loving Violet, Steve Lewis takes us to a prestigious liberal arts college, New York City, the beaches of Long Island, and Costa Rica with young writers pushed and pulled by extraordinary passion and abiding love. How do we choose–can we really choose–who we love and what we make of this life? Questions of the price of that love and what we invest in the art we make along with that love– heart-wrenching and deeply thought-provoking in this extraordinary novel.”
—Jimin Han, A Small Revolution

“Loving Violet is an irresistible novel about the powers of love and art. Steve Lewis limns the inevitable progression from the heady infatuation of youth to a more settled love in later years. All the characters are vividly drawn and the writing has the clarity and grace that is characteristic of Lewis’ work.”
—Angela Davis-Gardner, Butterfly’s Child: A Novel