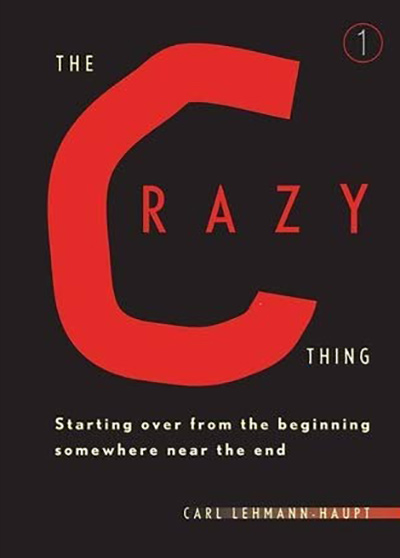 The Crazy Thing tries to respond to this endless question. It is a love story entwined with a philosophic quest. Beginning from the question about dying it goes on to explore some ways in which it might be possible to begin over again, and perhaps still learn how to live ‘somewhere near the end.’ The Crazy Thing is a memoir with three themes: the story of the author’s long love affair with the poet Celestine Frost; the drama of his enigmatic calling as an artist, writer, and thinker; and his lifelong search for the incalculable limits of the self.

The Crazy Thing is a work in progress, whose outcome is yet to be known. This first small volume will be followed by several more. It contains an invitation to the reader to post their questions, comments, and refutations regarding the book’s conclusions on a website — thecrazything.net. The author will take into account the most pertinent of those challenges to his understanding as he composes the subsequent installments. In the end, the book will be a work of collaboration between the author and the community it creates.

The Crazy Thing is an artist’s book, composed of drawings, photographs, and fragments of text. The fragments describe events from the author’s past, which alternate with journal entries from the present, in which the old man confronts the younger man he once was. The book is made up of many pieces, but all of them point to one conclusion — the picture of a man in search of his full stature.

As for the Crazy Thing itself no one can tell what it is. It is the X-factor that can’t be named because it is not a thing among the things of the world. Nor is it a power. Anyone may feel its inexplicable influence, but they will search in vain for the cause. The Crazy Thing is present only in its absence.

Listen carefully and you may hear it sweeping the top of the sky clean.

Carl Lehmann-Haupt is a writer, artist, and designer.